Americans and others around the globe took to Twitter to vent their righteous outrage after Twitter published the very poorly written film, “Cuties,” which gratuitously features 11-year-old girls doing sickening “twerk” dances. Many were disgusted that many “journalists” had earlier reviewed the film favorably as a “coming of age” story and excused or justified the “pedophile” angle of the flick.

After reviewing clips from the film, we can conclude that the people are justified in their righteous anger, and this is not just an example of an internet outrage mob. Thankfully, Twitter user Ghost Jim provided the clips so we did not have to actually watch this disgusting film.

Very shortly after it was released, the film was banned in Turkey. There is no doubt that this pornographic film should be banned worldwide.

Watch more, if you can stomach it.

As bad as the “twerk” dancing was, where the little girls were dancing around  like whores, other scenes were even worse, according to Ghost Jim.

The final clip is enough to make you downright retch.

Unsurprisingly, the amoral, if not downright Satanic, cosmopolitan elite loved the film.

The New Yorker complained that the film “became the target” of a “right-wing campaign.”

Rolling Stone wants you to know that the movie is “merely caught up in a culture war” and it “deserves to be seen.”

These people have zero morals.

Life lesson, folks: Never prejudge a movie by one poster. As @TessaThompson_x correctly pointed out, @Netflix‘s #Cuties, directed by Maïmouna Doucouré, is just a beautiful portrait of girls coming of age in our complicated world, so watch it for sure

For many Americans, this was the last straw. #CancelNetflix trended number one on Twitter as thousands announced they were finally cancelling their subscription to the streaming service.

Posobiec further noted how Netflix seemed to respond to its critics with a remark seeming to protect pedophiles with the same “special class” status reserved for women and minorities.

Besides being disgusting, the film was very poorly written, as evidenced by the atrocious screenplay in the above clips. The screenplay read like it was written by a six-year-old on a cardboard box.

The screenwriter, Maïmouna Doucouré, appears to be part of some sort of affirmative action to “hire people of color.” She was born and raised in parents to Senegalese parents. Rather than actually write a good film, she appears to be using the pedophile angle to create “shock value” that draws attention to her and to her film. 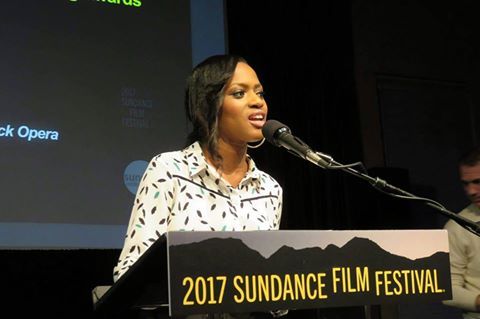 This is the problem with affirmative action, where people are hired simply because they are black women, and not on their merits.

Vice has more on the affirmative action phenomenon in entertainment.

Why Netflix Has Decided to Make Diversity a Top Priority

The streaming service is launching multiple shows that feature predominantly non-white casts. Creators and executives explain why now, more than ever, this is what they are focusing on.

So maybe that’s why it’s important that Netflix has continued to greenlight more diverse shows—not just as a token gesture, but as a commitment to real representation across genres and behind the scenes. Rather than just throw in a few non-white characters to balance out the cast, Netflix’s programming slate actively explores the specificities, cultures, and lived experiences of marginalized groups that don’t often get to tell their stories—or have them told at all.

And April 28 marks the premiere of Netflix’s Dear White People, a television adaptation of Justin Simien’s 2014 film of the same name. Like the movie, the series doesn’t just feature people of color, it’s about people of color. “It’s not just: Hey white people, these are things you need to know,” Simien told the crowd during a recent Netflix press event. “It also allows people of color to see themselves and to see, you know, their humanity.” Dear White People follows a diverse group of students on campus—Logan Browning plays biracial protagonist and controversial radio host Sam, stepping in for Tessa Thompson who originated the film’s role—as they navigate their mostly-white Ivy League world and speak truth to the microaggressions and racism they encounter. [Vice]

That sounds like the most boring pile of garbage I’ve ever heard of in my life.

No wonder Hollywood, and streaming services like Netflix, can barely produce even one good movie per year.

America used to have obscenity laws on the books that would make this pornographic filth illegal, but they were completely gutted by the Supreme Court over the years. You can read more about the court cases here:

For decades, the Supreme Court has struggled to define just what material is so offensive as to be legally obscene, and to delineate limits on the government’s ability to regulate sexually explicit material. In its efforts to keep up with the adult industry, and with changing technology, the Court has issued scores of opinions on pornography and obscenity. Here’s a summary of some of its more significant rulings from 1957 to 1997. [PBS News]

Of course, we already have obscenity laws on the books that could be used to take down the internet pornography industry, and the Deep State at the Department of Justice is refusing to uphold these laws. Conservative groups have lobbied Attorney General Bill Barr to enforce the law, but so far no dice. From National Review:

In the letter, George accuses the DOJ of abdicating its responsibility to prosecute obscenity in online content and asks that the attorney general clarify the department’s position on whether pornography is obscene and as such subject to regulation.

The desire for the Justice Department to deepen its involvement in prosecuting breaches of obscenity law has existed for some time. In 2017, Patrick Trueman, the head of the National Center on Sexual Exploitation and a former chief U.S. prosecutor for the Child Exploitation and Obscenity Section at the Justice Department, wrote that “we are in the midst of a public health crisis caused by pornography, a crisis that could have been prevented by the enforcement of obscenity laws.” In December 2019, four House Republicans urged Barr to begin prosecuting obscenity cases, after Obama AG Eric Holder had disbanded the Obscenity Prosecution Task Force at the Justice Department.

In the meantime, we would urge the people of the world to boycott Netflix. Don’t give your money to that cosmopolitan filth company.

Interestingly enough, this is what San Francisco now looks like as wildfires rage, shortly after Cuties was released and shortly after the California legislature voted to relax legal penalties for homosexual pederasts.